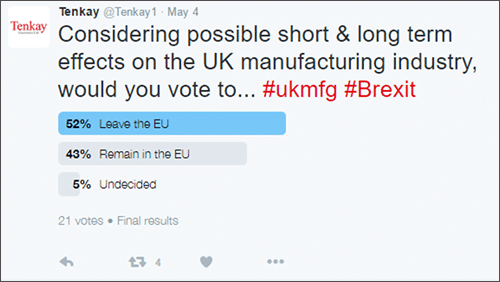 If the UK removed itself from the single market, will the desire of non-EU countries to trade with us be affected? Obama has already announced that despite our ‘special relationship’, if we vote leave on 23 June, we will end up at the back of the 10 year queue for new trade deals. But how real is that threat?

The UK would need to quickly cement existing trade agreements while finding new deals elsewhere in the world. Some will see this as an opportunity for the UK to go bigger and better, others a long hard slog to get back to where they were pre-Brexit.

For some, the carrot of the vote leave campaign is the reduction in red tape in this heavily regulated industry which costs businesses time and money. But what about the argument that leaving the EU may just make it harder to unravel what’s already in place, only to have to continue playing by the rules if new EU trade deals are to be agreed?

According to accountancy and advisory firm, BDO LLP’s survey of 632 British mid-sized companies, although the majority want to remain in the EU, 63% wanted less red tape and those polled wanted to see regulatory offsetting by removing an existing EU regulation for every new regulation adopted. Would the EU ever agree to such a request?

Although we may win when it comes to reduced regulation, many predict that pulling away from the free trade agreement and the tariffs that would be imposed as a result, would see an increase in supply chain costs including the costs to source raw materials and other imports from the EU.

But what if we updated our sourcing strategies so we are not purchasing key supplies exclusively from Europe? And could we find cost-savings through improved efficiencies within the supply chain, such as improved stock management and waste reduction?

With careful and thorough contingency planning, we could surely limit any negative repercussions of a Brexit.

The majority of foreign investment in the EU comes to the UK. Would Brexit make investors uneasy and encourage them to send their money elsewhere?

An EEF survey shows that 50% of manufacturers would be less likely to increase investment if the UK were to leave the EU. Is this simply a pessimistic view based on an uncertainty of the repercussions, or does this spell the beginning of the end for manufacturing in a stand-alone UK?

With manufacturing facing a skills shortage, will restrictions on free movement of people from member states in post-Brexit Britain exacerbate this further, or could this present an opportunity for a more targeted immigration policy, bringing in the skills we need?

Perhaps this could be the wakeup call needed to begin actively promoting manufacturing as a career path in schools, as well as reviewing the pay UK workers receive?

On the other hand however, if the manufacturing industry begins to deteriorate and we see fewer job opportunities because of possibly fewer or weaker trade deals, less EU and foreign investment, as well as less investment from manufacturers themselves, will we be forced to watch, powerless, as high skilled workers move overseas, taking their skills away with them?

With many influential figures split on the decision to leave or stay, it’s no wonder many are struggling with the importance of this decision. It’s a case of weighing up the positive and negative scenarios and identifying which way tips the balance to get Britain the better deal.

Whether we remain part of the club and help reform the EU from the inside, or leave and make going it alone work, one thing’s for sure, we have a long journey ahead of us.

How do you think a Brexit will change the UK manufacturing industry? We’d like to hear your thoughts or predictions, so please share them with us on Twitter using #ukmfg #Brexit.

Do you know which way you will vote?

Posted On: 27/05/2016
Posted By: Robert Doick
Previous: New i-Pulse line boosts placement capacity at Tenkay
Next: One year on – A look at the impact of our new SMT line
Back to News